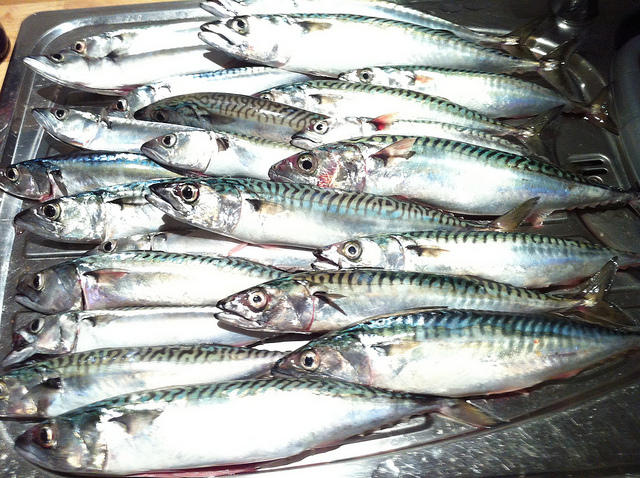 A tote of mackerel slides noisily down a metal chute into a warehouse at the fish pier in Chatham. It’s dark and chilly and I’m standing with Willie Ligenza, who caught the fish.

I asked him if today was a good haul. “I saw you got what, about five, six hundred pounds?”

How do you fish for mackerel, I asked. What kind of gear do you use?

“I use one handline, with eight hooks on it, and a lead weight on it,” Ligenza said. “And that’s pretty much it.”

“And you can bring up up to eight fish at once?”

“Yes, I personally can handle about eight fish at once,” said Ligenza. “I guess if I had a longer arm span, I could do more than eight. But right around eight is what I prefer on my line.”

Ligenza uses surgical tubing for bait. He said the fish like anything that sparkles, and they’re actually pretty beautiful themselves. “Just like a tuna fish. It looks like a baby Bluefin tuna - just not giant, just a little tunny, up to two pounds. And, they have every color in the rainbow. Read the full article here.

Gut the mackerel. Take a sharp knife and cut up the middle of the underbelly, from just past the tail to the gills. Slip your hands in, remove the viscera, and wash the fish out with cold water. Pat it dry, make 2-3 diagonal slits along the length of the fish on both sides, then rub the fish with the garlic. Dip each fish first in the egg, then in the seasoned flour. Warm up the butter in a large cast iron skillet and fry the fish for 4-5 minutes per side, or until a golden crust forms and the inside meat is just cooked through. Serve hot, with a squeeze of lemon juice.

KEEP UP WITH THE FLEET